will provide high performance and best quality of aesthetic and medical products.
(+82) 70 5089 3335
ewellme@ewellmedi.com 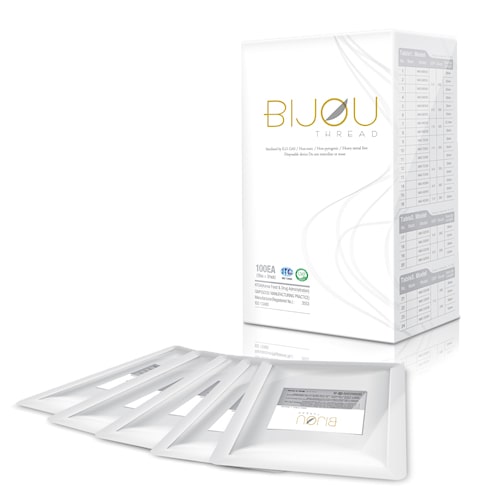 The brand name ‘BIJOU’ was originated from French word “BIJOU” which has meaning of Jewel and masterpiece. It is considered that BIJOU thread series were primarily created to target European Market.

BIJOU threads are excellent in terms of its safety and diversity in product line-up. Moreover, BIJOU threads have been exported for several years to more than 20 countries especially in European and Middle-East Asian countries, which means its efficacy and safety are already internationally recognized, marketing manager of Ewell Medical explained.

Shin Ickjoo, a CEO of Ewell Medical, explained that Ewell Medical will proceed with direct delivery to hospitals that are interested in buying BIJOU Thread series as well as B2B marketing with twoM company to establish itself in domestic market as soon as possible. In other words, Ewell Medical would also make deals directly with hospitals as well as resellers depending on the needs.

He said “Ewell Medical will also penetrate international market by participating in Medica 2016 which will take place in Dusseldorf, Germany, AMWC 2017 Monte-Carlo in Monaco, and Dubai Derma 2017 in UAE.”

“Due to the nature of thread lifting, skill-level and techniques of procedure are very important as different outcome can be seen depending on the procedure techniques. The launching of BIJOU Thread series in Korea market has significant meaning because it will offer more opportunities for foreign medical teams in Europe, Middle-east Asia, and USA to build up direct relationship with experienced and skilled Korean medical team. Ewell Medical is planning to host more local symposium and hands-on seminars.”, he added.

“Looking at the cost-effectiveness aspects, Cog Basic (bi-direction) is yet leading more sales than applied cog model. BIJOU Cog threads are steadily gaining reputation by users for its strong and tight effect. It can minimize short-term complication that might be occured during the procedure due to the shape of cog. Choosing a blunt-shape needle will make minimum wound on blood vessels and tissues, which will cause fast recovery.”, the marketing manager of Ewell Medical explained.

With the beginning of BIJOU Thread Series, Ewell Medical will launch other medical devices and solutions focusing on minimal invasive products such as fillers, and continue to take over the domestic and international medical markets.

[Russia Intercharm 2019] Thank You for visiting our stand.